Okay soooo since I didn’t write last week (too much life going on), I’ll fill you in on everything that happened! Remember my last post when I mentioned a surprise? Yeah, I adopted a puppy from my work. I fell in love with her the moment I interacted with her on her intake. She was a chihuahua/corgi mix and she was ADORABLE. Still is, of course. So anyways, she went out to foster for a couple of weeks and when she came back I took her home and my work let me try it out for a couple of days before I made the big decision. It was tough, but Jesse said he wanted to adopt her so we did. We adopted her on a Friday and then over the weekend we both realized we made the wrong decision because it was very difficult to take care of a puppy and Levi since they both required so much attention. I won’t go into full detail because my heart still hurts but we ended up returning her back to my work. She’s since been adopted by a younger woman who can give her all the love and attention she needs. I had named her Penelope and we called her P Nelly. She was the absolute best pupper and I’m devastated that it wasn’t the right time in our lives to have her in it. It was the most difficult decision I’ve had to make thus far. I definitely didn’t want to bring her back but I had to do what was right for her and my family. You know, working at a shelter I would see families return puppies all the time and think, “Damn, what idiots. OF COURSE it’s going to be a lot of work to have a puppy with kids!” …and here I am doing the exact same thing. I guess I just underestimated all the work since I loved her so much. She was the perfect puppy, though. Super easy going and chill and cute and literally perfect. I hope she has the best life and gets all the cuddles and love because she deserves it. 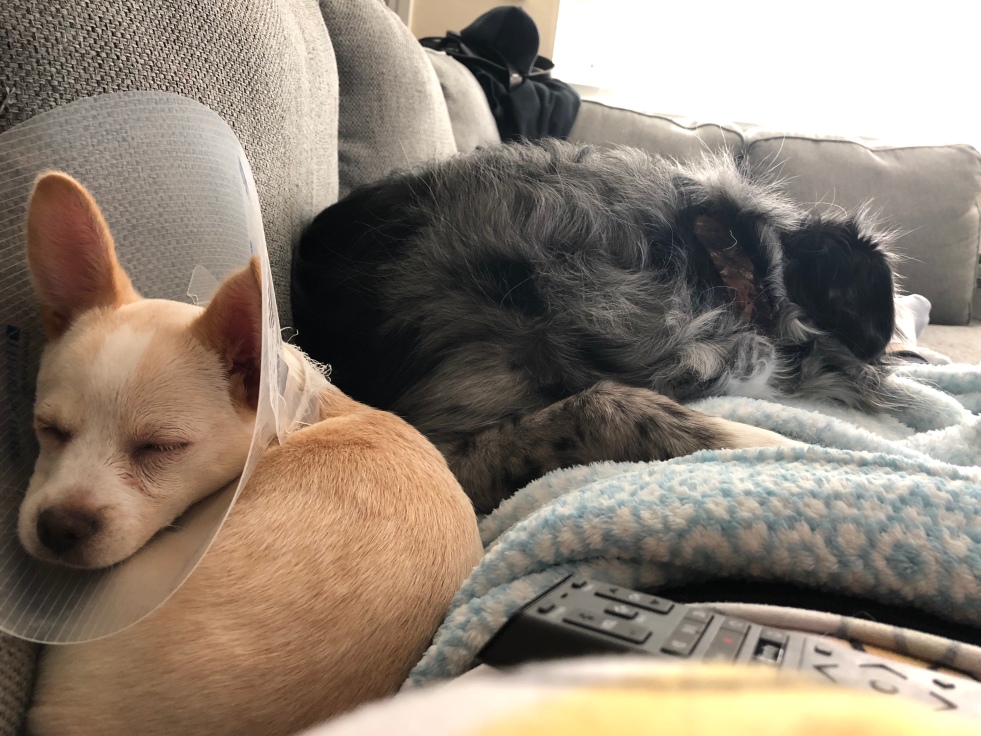 Okay, now that I’m crying…let’s move on to my other news. I am quitting my job. Kind of backwards since a lot of moms seem to quit their job right after having their baby instead of a year later but it’s what we’ve decided to do. Jesse and I really want to spend time together with Levi as a family during the summer and holiday’s. I can’t really tell how long I’m going to off for because it’s the weirdest feeling to me right now. I like having a job and going to work (most days, haha) and having somewhat of a social life. I also like making my own money and being able to pay my own bills and all of that stuff. So, it’ll be different. But I am really looking forward to spending time with Levi and Jesse. It’s going to be so nice to finally be with them. I feel like I’ve missed out on so much for some reason. I don’t have a regular 9-5 job and my schedule isn’t always the same so it’s hard sometimes to spend quality time with them. Sunday’s will now be days for relaxing instead of house chores and grocery shopping. It’ll be a nice change. My last day will be the 19th of April, so I have a few weeks left.

Not much has changed in our house except that Levi now has his top teeth coming in, which I could have talked about in the last post? I should probably reread those before I write another blog post, haha. Anyways, They’ve been hiding in his gums for a while and now one tooth has finally poked through! The other doesn’t seem to far behind. He’s been eating like a champ. We’re still working on the sippy cup thing. Damn, I wish someone warned me how freakin hard it is to teach them how to use a sippy cup! Geez, I feel so behind. I keep having to remind myself that he’ll be OK if he doesn’t learn right away and he’ll learn eventually. #WorkingMomsGuilt. I just love my chunker so much and I can’t believe he’s 11 MONTHS! I’m still in the process of planning his birthday party. I really don’t want it to be over the top but I still want a theme and I want it to be cute. I can’t believe he’s going to be an entire year old. We’re also trying to transition him into his crib full time. He’s good about taking naps in there but he’s stubborn when it’s bed time. I’m just terrified of SIDS now that he moves around so much. I actually feel like it’s easier when they’re smaller because if you don’t move then they’ll be fine but now he’s all over the place and it scares me!

Last night I hung out with my friends and went to a Korean BBQ place and man oh man was that delicious! I’ve never been before and I already can’t wait to go back. I’m usually not into eating so much meat but it was so flavorful and….my mouth is drooling already. My blood sugars have been pretty high lately and I’m not sure why so I’ve been pretty unhappy about that as of late. It really messes with my mood and gets me sad. I’m waiting to get paid so that I can sign up to the gym because I really miss working out! I’ve done it at home a couple of times but it’s just not the same for me. I really want to focus on my health and I’ve been so stressed out lately with everything that’s going on that I’ve been stress eating and not choosing the healthiest foods.

Levi’s asleep and I’ve already cleaned the downstairs part of my house and now I’m too tired to work on the upstairs. One of the things I also look forward to being off is all the home projects I’ll finally have time for. I have picture frames I’ve been wanting to hang up for about a month now and they’ve just been sitting there collecting dust. You’d think I’d have time for hanging picture frames but I don’t. And Levi’s room is a disaster. There’s a pile of clothes just collecting on the floor every time he outgrows something. I want to donate most of it but I have to go through it. Also, anyone have an idea of where I can donate all of those clothes? I guess I could do Goodwill but I wanted them to go to someone who might need them more, like a shelter or something. I’ll do some research.