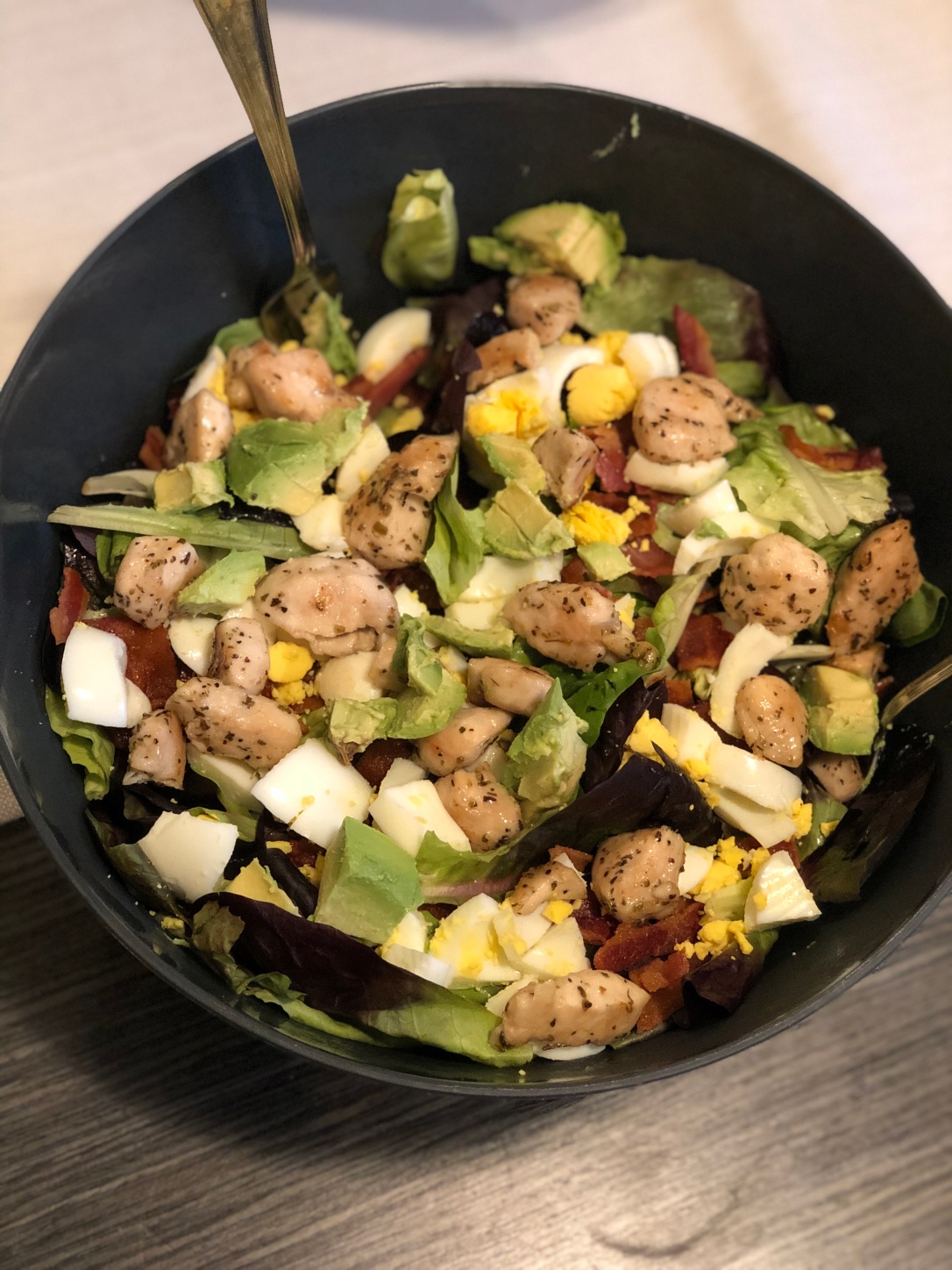 (Feeling uninspired for a yummy salad? Add some bacon, seasoned chicken, and hard boiled egg! Not shown are the chopped veggies at the bottom of the bowl lol)

We’ve made some great strides in the past few days with new foods! Levi really likes waffles and meat! He had his first taste of some pulled pork at a BBQ restaurant close by and he was obsessed. I know it had BBQ sauce on it and it might just have tons of sugar but hey, I don’t want him eating bland food because I want him to experience all types of flavors! Tonight I made a salad with chicken that I seasoned with Italian seasoning and I tore it into little pieces and he was a total fan of that, too. I am so proud of him! I was feeling sad earlier because I saw a photo of how much a toddler should eat (I know he isn’t a toddler yet) and I was like, damn, Levi definitely doesn’t eat that much solids in a day. I was feeling like a failure, again, for not being home with him all the time to control what and when he eats. I don’t have all the time in the world to make baby muffins or pancakes or whatever stay at home moms make for their babies. I know working moms do it too, but I’m hoping you get what I’m saying.

Anyways, he’s still crawling around and is totally obsessed with standing and using the couch or us to hold himself up. I’m not sure if he’s been doing this and I haven’t noticed but yesterday I saw him go into sitting from laying on his tummy. Like, when was he capable of this?! I was so proud of him! I have no idea when he started doing that but it had to have been recent. Saturday night my parents watched him overnight so me and Jesse could do a date night and have an uninterrupted sleep! How cool is that? Our date night consisted of In N Out and Target and then getting into bed almost immediately after getting home. We were both exhausted. I had to work that day and didn’t get off until 7 so I was really tired already. As soon as I woke up in the morning I wanted to get Levi because I missed him so much. I didn’t even get to sleep in, I woke up at 6:30.

We finally got a real high chair for Levi and I love it! We got rid of the pack and play that we had downstairs because anytime we put Levi in it, he would just stand up and hold onto the table and we were scared he would fall out. We could have lowered the mattress to the bottom to be more of a play pen but the thought of confining him to that small area seemed dumb because I’d rather just put him on the living room floor. My house is pretty compact so it’s not like he’s ever far away from me if I’m in the kitchen and he’s in the living room so it’s not a big deal. It definitely frees up a lot of space in our house, though! It’s nice to get rid of some baby stuff, as much as I miss him being small. I actually can’t wait until he no longer needs formula because I really want to get rid of the bottles! I know he’ll still drink from bottles but I don’t like the thing we hang our bottles on to dry, it takes up space on my counter and just creates more clutter.

We’re getting ready for Levi’s first birthday and I’m trying to come up with all the details so I won’t be stressed out. I’m getting excited for it! Pizza and cupcakes, we’re keeping it simple! We have a clubhouse behind our home where we live and we might have the party there because I feel bad using my parents’ house and I don’t want them to stress about having people over. We’ll probably just use the clubhouse, which I think is free because we have HOA fees so it probably pays for it? I have no idea actually. Just another thing we have to check out.

Lately I’ve been having issues with my blood sugars, which I think I might have mentioned last week so I recently added a unit to my long lasting insulin for the mornings and it seems to have helped me throughout the day. I have woken up twice with blood sugars under 120! Awesome! And to those who might be wondering, no, I’m not trying to get good blood sugars to have a baby. I just really want to be healthy and when I was trying for a baby and while I was pregnant I had the best blood sugars I’ve ever had while having diabetes and it was awesome. It was a lot of hard work and I don’t plan to be that strict but I do want to be healthy like that again. It’s so important for anyone with diabetes!

I want to end this post with something I was thinking about earlier today and that is to really appreciate your life and where you’re at. Everyone is so different and I know I’ve talked about social media and how easy it is to compare yourself to others but I caught myself doing it the other day and it made me feel so shitty. I follow someone who has multiple kids, dogs, a home, a marriage, good paying jobs, and it made me want that. WHY WOULD I WANT THAT? I already have a family, two pets, and a home. But I don’t have that marriage. I don’t have a good paying job. The thing is, I haven’t’ worked for a good paying job, you know what I mean? Why should I have something that I haven’t worked for? The marriage thing is a work in progress, lol. My time will come one day but it isn’t that important when I really stop to think about it. People get married to start their lives together, right? Well we’ve already started ours, we just skipped a step and that’s OK. It’s OK to skip steps. I think what I’m really trying to say is that there’s this whole perception that after high school you need to go to college and then get a great job that pays well and then you get married and buy a home and start a family. It doesn’t need to be that way, though. It sucks that that’s what people want, exactly in that order. And if you don’t do it in that order then you’ve messed up or if you’ve skipped a step you’ve messed up. Who cares if you still live with your parents and you’re 25 or that you work as a cashier or that you had kids before you got married. It shouldn’t define you or your happiness. When I stop to think about all that I have I’m reminded of how blessed I am. I think everyone is blessed in their own ways, you just have to stop and think about it all. If you live at home with your parents or a family member maybe that means you get to save money or travel more than someone who doesn’t. If you live with a partner that means you get to spend time with them and don’t have to worry about long distance, etc etc. There’s pro’s to every situation, you just have to think about it.

Hopefully that helps anyone who might be going through a social media depression of comparing your life to someone else’s. It helped me.

This is a text widget. The Text Widget allows you to add text or HTML to your sidebar. You can use a text widget to display text, links, images, HTML, or a combination of these. Edit them in the Widget section of the Customizer.