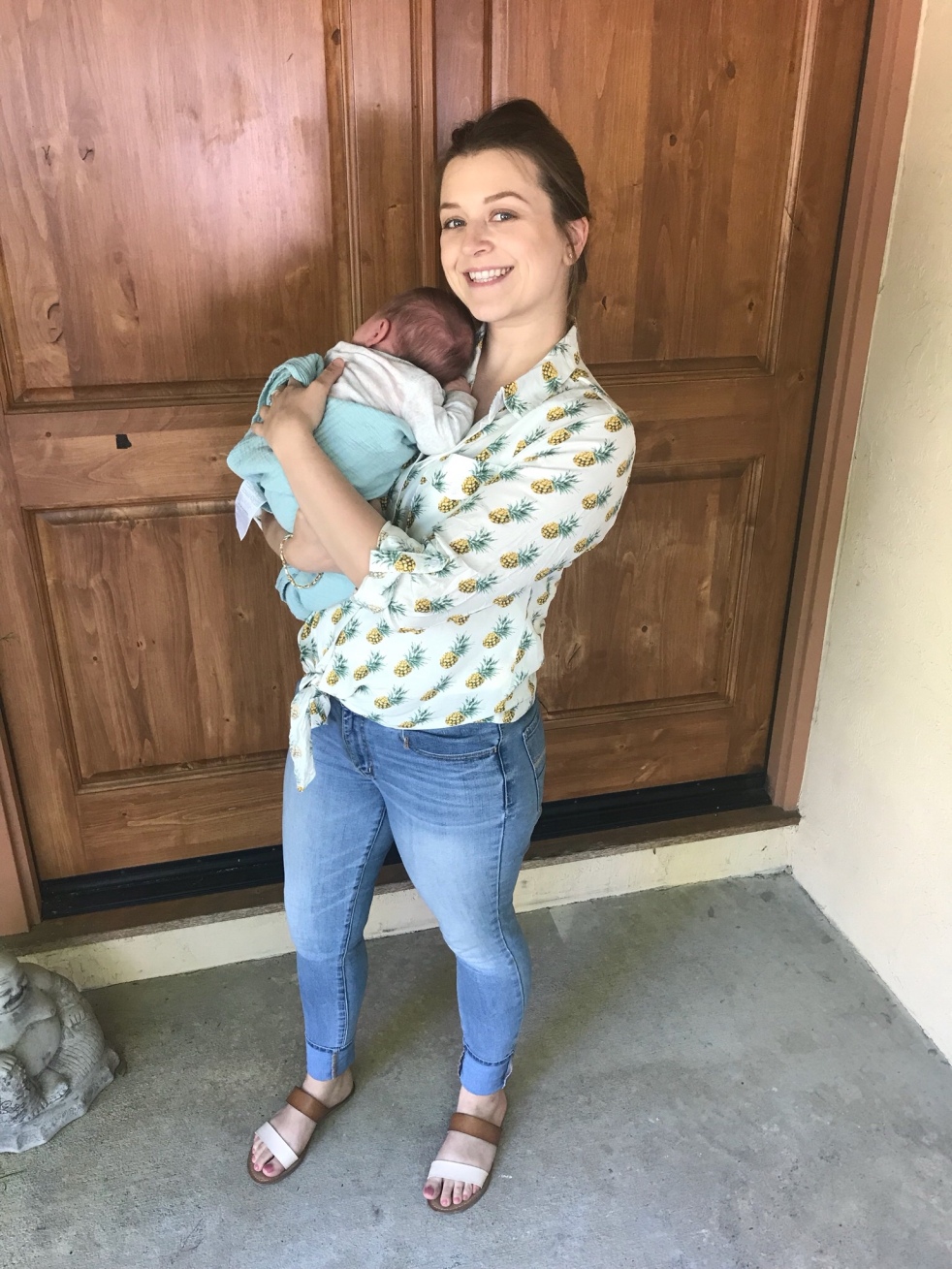 For all those mommas out there, I hope your day was special yesterday! Not going to lie, I actually woke up in a weird mood but the day did get better! I spent it with my family and Jesses family. Levi spent most of the day sleeping, lucky! I still can’t believe I’m a mom! It’s been a crazy few weeks adjusting to this new way of living and I get excited just thinking about my family’s future together.

Speaking of my son, his update includes a goopy right eye instead of the left! Weird how it went to the other eye?? Today is the first day his eyes haven’t been goopy though so I’m hoping it won’t come back! The doctor said it was a clogged tear duct and just told me to do a warm compress and massage it. He had a good 2 week checkup doctors visit. He grew an inch already and has regained his weight that he lost in the first week. Doctor said he looks great! He has been congested the past few days only in the mornings with a few sneezes and I emailed the doctor today and he told me it was normal and that it should go away within a few weeks and to just use a humidifier, which I’ve been using. It’s not terrible congestion but I hate hearing him sound like that! It doesn’t seem to bother him much though. His jaundice is completely gone (not sure if I mentioned that in the last post) and he’s following faces a lot more. He still has the same periods of being awake, which still sucks haha. Sometimes it’s tough staying awake until midnight! I miss going to bed earlier.

Mommy update includes the bleeding finally going away! I can finally wear thongs again! Haha sorry, the full booty undies are only comfy at night! I still only fit into a few pairs of jeans and I haven’t been really good at eating healthy so I don’t see myself fitting into all of my clothes until I can actually work out again. I need to work on that but I’ve been indulging in a ton of ice cream lately. I’ve given up on the whole breast feeding thing completely, as you might or might not know. But I’m still producing milk. I had attempted the breast pump and that didn’t go so well but I might try it again. I should probably just give up by now but sometimes I feel SO down about not breast feeding. I almost feel like such a bad mom that I’m giving my son formula when I’m producing milk. But when I tried to have him breast feed several days ago he wasn’t having it. He wouldn’t latch on at all because he’s so used to a bottle now and that’s much easier I’m sure. I love the convenience of formula feeding but when I think about giving my son the best nutrition it’s obviously in breast milk and I feel like a terrible terrible person. I wish I didn’t feel that way. I wasn’t going to mention my mental health but if I were to act like I was okay and my life was great then I wouldn’t be able to connect with anyone else who feels this way. I’m not one to want to talk about these feelings in person so if you know me and you’re reading this, just know I’m handling things on my own and I don’t want anyone to bug me about how I’m doing. Although I know it would be in good intentions, I just get annoyed? I put a question mark because I don’t know why I get annoyed, but I do. Anyways, for a few days I just felt so down. Like, all I wanted was to be completely alone and cry and then I felt bad that I wanted that because I can’t do that anymore now that I have Levi because I need to take care of him. I felt selfish for wanting that. It’s quite a strange feeling. Some days I’m happy and some days I feel so down and out. Even though today is a good day, who knows what tomorrow will bring. I wouldn’t say I have postpartum depression but I’m not going to rule it out completely. If things get worse I know to seek out for help but for now I just like to deal with it on my own. Writing in my journal helps, and writing on this blog helps too. I have my reasons for being sad but that’s not something I want to share.

I hate to leave this post on a sad note but hey, it’s what’s going on in my life and I don’t want to act like my life is perfect because it’s not! And I hope if any other new moms are feeling this way, you know you’re not alone.